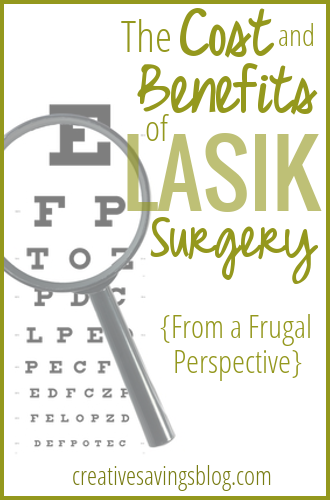 Years ago, it seemed like LASIK was becoming as much of a trend as skinny jeans in the local department stores. Ick.

Almost all my friends were doing it, and even though I had really bad eyesight, LASIK was not on my radar. Not only am I deathly afraid of sharp objects {especially those pointed at my eyes}, it was also super expensive!

Nope, glasses and contacts worked just fine. Until they didn’t, and LASIK became the only other alternative.

Can I just lament how hard it was for me to spend that kind of money?! Even when I really needed it? I absolutely hate unplanned expenses, and LASIK certainly became one of them. Even though we didn’t go into debt for it, there were still areas of our budget that we had been trying to save up for….a.k.a… a down payment for our Florida house.

So yeah, that definitely was pushed off for another couple months.

Despite the financial setbacks though, LASIK truly was one of the best things I’ve ever done, and I don’t say that lightly. So, if you’ve ever thought about LASIK, or seriously considered it, here are some things you should probably know before you schedule that appointment.

Or should I say…..they were things I wish I would have known!

The Cost of LASIK

LASIK is considered a cosmetic procedure, so it’s pretty rare for any insurance to cover it. I would also say it’s a mega “splurge”, and is only done if you have the extra money for it. {Which, let’s be honest, extra money is just as rare as LASIK being covered by insurance!}

As far as the actual cost, prices are pretty much all over the place. However, the most common seems to range from $1,000-$2,000 per eye. Mine ended up around the $1,000 mark, but only after I shopped around. And yes, you should shop around for LASIK!

My first instinct {and rightfully so} was to simply accept the referral from my eye doctor, but after an expensive first visit and a price tag that gave me many restless nights, I decided to make a few calls.

I’m so glad I did! Not only did I save on the eye evaluation appointment {which ended up being free}, I also shaved $2,000 off my final cost.

The Benefits of LASIK

Although I was convinced I would love the end results, there was practically no limit to my nerves as the surgery date approached. I read just about everything I could about LASIK, because for some reason, I thought the more information the better.

And yes, I am totally admitting to watching a YouTube video of LASIK the morning of my surgery. It didn’t calm my nerves….at all.

Obviously, I went through with it, and despite a few days of uncomfortableness, I was absolutely thrilled with my new eyes.

The only thing I didn’t expect was how dry my eyes felt for the weeks and months following the surgery. In fact, they still get pretty dry if I stare at a computer too long or stay up too late. But it’s nothing that a few drops here and there can’t fix, and if that’s all I have to deal with, I’m one happy girl!

Is LASIK Right For You?

So in the end, my frugal opinion on LASIK is this: If glasses or contacts bother you to the point of serious annoyance, save up for this surgery.

Notice I said save up, not just go and do it. I’m a big proponent of conscious spending, but if you have more important things like debt to pay off first, then obviously, I would suggest doing that before jumping into a procedure like this.

However, it’s not impossible to save up for either. Remember my little mantra? “You can afford what you prioritize”, and if LASIK is a desire, then make it a priority. Start stashing away the extra pennies, and then go get it done. I’m pretty sure you won’t regret doing so!

For those who have considered LASIK even just a little bit, if you have any questions at all after reading this post, please feel free to leave them in the comments and I will do my best to answer them.

I’m also going to label myself a super nerd, and say that I have a eye care spreadsheet that I made for myself, and anyone who will be undergoing the procedure in the future is certainly welcome to it. You have a ton of drops to remember, and this really helped me figure out what I needed and when. If you would like a copy – just email [email protected]

Whew! I apologize for such a long post. I hope it was at least a little bit helpful!

How seriously have you considered LASIK surgery?